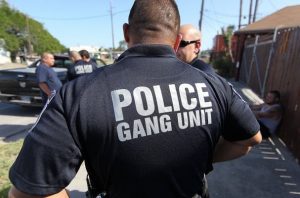 LOS ANGELES – Seven Los Angeles men were charged in a 10-count indictment unsealed Thursday with participating in the 2014 firebombing of residences of African Americans and for their roles in a racketeering enterprise that used violence and intimidation to control the perceived territory of the Big Hazard street gang.

According to a press release by the United States Attorney’s Office, on June 22, 2016, a federal grand jury returned an indictment under seal charging the defendants, all of whom are members and associates of the Big Hazard or Hazard Grande (Hazard) street gang, with a variety of violations stemming from the racketeering enterprise and related to the alleged firebombing that occurred on May 12, 2014, which was intended to drive African Americans from the Ramona Gardens Housing Development (RGHD).

The RGHD is a federally and city funded housing development that is occupied primarily by Hispanic residents and located in Boyle Heights.

Carlos Hernandez, aka Creeper and Rider, 31; Jose Saucedo, aka Lil’ Moe, 22; Francisco Farias, aka Bones, 25; Joseue Garibay, aka Malo, 23; Edwin Felix, aka Boogie, 23; Jonathan Portillo, aka Pelon, 21; and Joel Matthew Monarrez, aka Gallo, 21, were charged with conspiracy to violate civil rights; conspiracy to use fire and carry explosives to commit another federal felony; attempted arson of federal property; using fire and carrying explosives to commit another federal felony; aiding and abetting; violent crime in aid of racketeering and interference with housing rights.

“The defendants used firebombs to drive the victims from their homes because of their race,” said Principal Deputy Assistant Attorney General Vanita Gupta, head of the Justice Department’s Civil Rights Division.

“This is a hate crime.  Such violence and intimidation have no place in our society,” Gupta added.

“Crimes targeting innocent people based on the color of their skin are among the most heinous crimes a community can suffer,” said U.S. Attorney Eileen M. Decker of the Central District of California.

“In this case, the crime was particularly disturbing since the targets of the criminal conduct included children.  As the indictment unsealed today demonstrates, criminals that fuel racial animosity will face severe consequences.  All of our communities are made safer by removing these defendants, for whom violence and intimidation are tools of their trade, from the streets,” said Becker.

“This investigation resulted in one of the largest civil rights indictments in local history thanks to the tireless efforts put forth by agents working with detectives to build this case over the past two years,” said Deirdre Fike, the Assistant Director in Charge of the FBI’s Los Angeles Field Office.

“The FBI is committed to seeking justice for the victims whose homes were barbarically firebombed as they put their children to bed, or anyone whose Constitutionally-protected right to happiness is threatened based on the color of their skin,” Fike added.

Evidence gathered by investigators indicates this attack was motivated by hatred stemming from racial bias.  Most of the victims of the firebombing were African-American families who were at home with their children, many of whom were minors.

“Hate crimes and arson are among the most heinous offenses that affect our community,” said Fire Chief Ralph M. Terrazas of the Los Angeles Fire Department (LAFD).

“The LAFD greatly appreciates the tireless and collaborative efforts of the U.S. Attorney, FBI, ATF, LAPD and our own arson investigators, all of which assisted in the apprehension of the individuals accused in this case.  We are hopeful that the U.S. Attorney will achieve a successful prosecution,” said Terrazas.