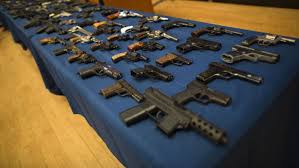 LOS ANGELES – An Asian man in Southern California who allegedly drove his truck into a crowd of peaceful demonstrators on May 31 in Pasadena was arrested Wednesday on a federal criminal complaint charging him with conspiring to violate firearms laws, the U.S. Attorney’s Office announced Wednesday.

Benjamin Jong Ren Hung, 28, of San Marino, is charged with one count of conspiracy to transport firearms across state lines and to make a false statement in acquisition of firearms.

At his initial appearance this afternoon in United States District Court, Hung was ordered detained pending a Monday hearing to determine his bail status. Hung’s arraignment is scheduled for October 15.

According to an affidavit filed with the complaint, Pasadena Police officers arrested Hung on May 31 after he intentionally drove his pickup truck into a crowd of protesters demonstrating in Old Town Pasadena. The crowd scattered as the truck approached, and no injuries were reported in the incident, the affidavit states.

During a search of Hung’s truck on May 31, police found a loaded semiautomatic handgun, multiple high-capacity magazines loaded with ammunition, an 18-inch machete, $3,200 in cash, a long metal pipe, and a megaphone, according to the affidavit.

Hung allegedly acquired the firearm from a friend who purchased it for him in Oregon and then transported it to California. When the friend purchased the firearm, he falsely represented that he was the actual transferee of the gun, rather than Hung, the affidavit states. Hung and his friend then allegedly conspired to transport the firearm to California, where Hung kept the firearm at his San Marino home prior to bringing it to the May 31 demonstration.

The affidavit further alleges that in March Hung purchased at least three additional firearms in Oregon and then transported them to California. He also allegedly amassed other firearms and tactical equipment from suppliers throughout the United States and used his family’s vineyard in Lodi, California as a training camp to prepare to engage in civil disorders.

If convicted, Hung would face a statutory maximum sentence of five years in federal prison.

This matter was investigated by the FBI’s Los Angeles Joint Terrorism Task Force and Civil Rights squads and the Pasadena Police Department.

This case is being prosecuted by Assistant United States Attorneys Frances S. Lewis of the Public Corruption and Civil Rights Section, and David T. Ryan of the Terrorism and Export Crimes Section.