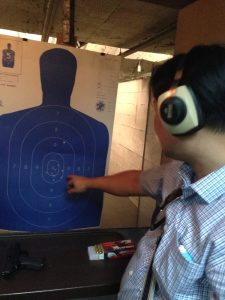 California Governor Jerry Brown signed a package of six bills on June 30 that expand background checks for ammunition purchases; ban the sale of semiautomatic rifles with “bullet buttons” that allow for easy replacement of magazines; and restrict the loaning of guns without background checks to friends and family.

All America Chinese Youth Federation (AACYF), a non-profit organization based in Los Angeles, said in a statement Tuesday that those legislations have set more strict regulations governing the purchase and carrying of weapons, but the effectiveness of those legislations still remain to be seen.

AACYF, together with seven other Chinese American organizations, called for the state to raise sales tax on weapons to a significant level and request that gun owners should purchase insurance and pay high registration fees.

Those organizations said they will launch a campaign to send letters to elected officials asking for more strict gun control measures.

Also on June 30, the California State Assembly approved a bill by Senator Loni Hancock to prohibit the possession of any ammunition-holding device for an assault-style weapon that holds more than 10 rounds.

Some of California’s largest cities, including San Francisco, Los Angeles, and Oakland, have already acted and voted to ban high-capacity magazines.

A recent PPIC survey found that 57 percent of Californians are concerned about the threat of a mass shooting in their area.

“By banning these weapons statewide, we would take a step toward preventing future mass shootings and ensuring that our constituents live in safe neighborhoods,” Hancock said.

On the federal level, U.S. Congressman Ted Lieu (D-Los Angeles County) called on June 17 for an end to gun violence and urged his colleagues in the House of Representatives to finally stand up to the National Rifle Association (NRA).

“Since Newtown, there have been over 1100 mass shootings in America. 297 people are shot every day in our country – that means an American is shot every five minutes,” Lieu noted.

Democrats and Republicans in the U.S. continue a political battle over the proper response to the spate of mass shootings, with Republicans bending to possibly accept some gun control curbs but unwilling to agree with the extent of Democrats’ proposals.