A Premeditated Attack between U.S. and China Is Unlikely, but Forces Pose Serious Threats to Each Other, Says RAND

LOS ANGELES — A premeditated attack between the United States and China is unlikely, but developments in military technology such as sensors, global positioning, weapon guidance and digital networking have advanced to the point where both U.S. and Chinese military forces pose serious threats to each other, says a study by RAND Corporation. 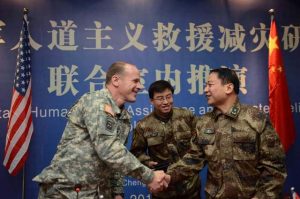 The study, “War with China: Thinking through the Unthinkable” released by RAND Corporation Thursday, said as Chinese military capabilities improve, the United States no longer can be certain that a Sino-U.S. war would lead it to achieve a quick and decisive victory.

“A Sino-U.S. war may seem unthinkable, but the course and consequences need more thought in both countries,” said David Gompert, lead author of the study and an adjunct senior fellow at RAND, a nonprofit research organization.

The advanced strike capabilities of each side, combined with the shrinking of the military gap between them, could make such a war intense, highly destructive and yet protracted, according to the study.

“History suggests that wars that are very destructive to both combatants have a way of persisting as long as neither side faces complete defeat,” Gompert said.

“Our findings indicate that this could be true of a future Sino-U.S. war.”

Tensions exist between the United States and China on a number of issues, and a crisis could occur and involve incidents or miscalculations that lead to hostilities, the study said.

For example, China could try to intimidate its neighbors below the threshold of U.S. intervention and misjudge where that threshold is, or underestimate U.S. willingness to back Japan militarily in a crisis over disputed territory in the East China Sea.

The RAND study examines paths that a war between the United States and China might take in terms of intensity and duration, and the effects on both countries of each path.

In addition, the study explores ways to balance U.S. aims against the expected costs, mechanisms for bilateral communications during war and preparations the United States should make.

It also considers economic, domestic, political and international factors that could be involved. It regards nuclear war as highly unlikely.

Technological advances in the ability to target opposing forces are creating a condition of what Gompert and his colleagues call “conventional counterforce,” where each side has the means to strike and degrade the other’s strike forces.

Because this increases the incentive of each side to attack an enemy before one’s forces are attacked, it will make crises and military confrontations — such as the ongoing disputes in the South China Sea — increasingly and dangerously unstable, according to the study.

At present, Chinese military losses would significantly exceed U.S. losses during a war. However, the unrelenting improvement of Chinese “anti-access” capabilities could increase U.S. losses and, as U.S. strike capabilities are depleted, reduce Chinese losses.

But even as China improves its military abilities, it could not be confident of gaining military advantage. This suggests the strong possibility of a prolonged and inconclusive war, according to the RAND report.

In such a war, however, nonmilitary factors — economic costs, domestic political effects and international reactions — may become increasingly important and unfavorable to China.

Because of the impact on trade, China’s gross domestic product could decrease by 25 percent or more in the course of an intense war lasting a year, according to the study.

Internally, China’s authoritarian regime and nationalistic public mood would, in the short term, enable it to wage war despite heavy losses, whereas U.S. politics are less predictable, the study said.

Over time, however, China could be subject to heightened dissidence and separatist activities, especially as the economy — the ultimate source of regime legitimacy — is battered.

Internationally, Russia and NATO might line up behind China and the United States, respectively, but have no significant bearing on the fighting, according to the study.

Its network of Asian allies could provide the United States with important material advantages. Above all, Japan’s entry into a Sino-U.S. war could tilt the military situation, though this could increase Chinese resolve and result in attacks on Japan.

The study, “War with China: Thinking through the Unthinkable,” can be found at www.rand.org. Co-authors of the study are Astrid Stuth Cevallos and Cristina Garafola.

To read the story from Apple News, please go to: