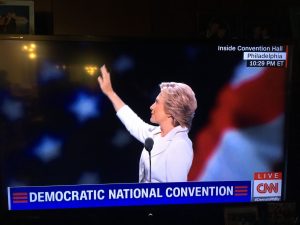 LOS ANGELES – Traditionally more Chinese in the United States support Democrats, but in this year’s presidential election, many Chinese are hesitating on whether to vote for her. 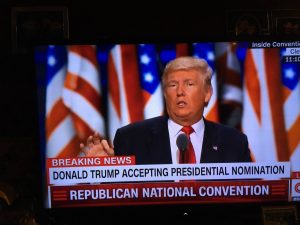 Nancy Yan Xu, a reporter from China, posted six photos soon after Hillary Clinton’s acceptance speech as Democratic presidential candidate, three are from the Clinton family and the other three from the Donald Trump family. Similarly, both candidates were introduced by their daughters.

“To those who judge people by appearance and sense of humor, Donald Trump, supported by his gorgeous wife and daughter, is certainly a better choice than Hillary Clinton,” Xu wrote in her WeChat post.

Many Chinese who watched the live broadcasting of the introduction speeches of both Ivanka Trump and Chelsea Clinton at two separate conventions held the same view.

Another Chinese nicknamed Three Kingdoms, was a Republican supporter, but this time he was so disappointed that he wrote in his Wechat post that at least one of his family members would vote for Gary Johnson, former New Mexican Governor, a Republican turned Libertarian Party presidential candidate.

Darrick Im, a Chinese American grown up in the U.S., said he does not like Trump nor Clinton, but of the two disliked candidates, he would vote for Clinton, though not very willingly.

William Wu, a TV producer in the U.S., commented on the Wechat that the rule of the game is still in the hands of the privileged. On the Republican side, first the father (he means George Bush) then the son (he means George W. Bush). On the Democratic side, the husband (he means Bill Clinton) held for two terms as the U.S. president, and now the wife (he means Hillary Clinton) wants the position. To Wu, this year’s presidential election is a game to see who is more rotten.

Sister Feng, a well-known web blogger in China with 5.5 million fans in her social media, who came to the U.S. in 2010, wrote on the Phoenix TV website that as a woman herself, she does not like Hillary Clinton.

She wrote that she dislikes Hillary not only because when she talks, she always talks some political clichés and has shown no sincerity. Her remarks are politically correct, but not attractive, even to new immigrants like her.

According to Sister Feng, many Chinese dislike Hillary because of what she has done on foreign policy as U.S. Secretary of State, and they worried that if she got elected, U.S.-China relations would be worsening, and that is not to the benefits of the Chinese in the U.S.

Sister Feng is not a U.S. citizen, but she said if she had the right to vote, she would vote for Trump but not Hillary.

To read from Apple News: https://apple.news/TzL9hL9SrRLKEi1c5ExMyXA