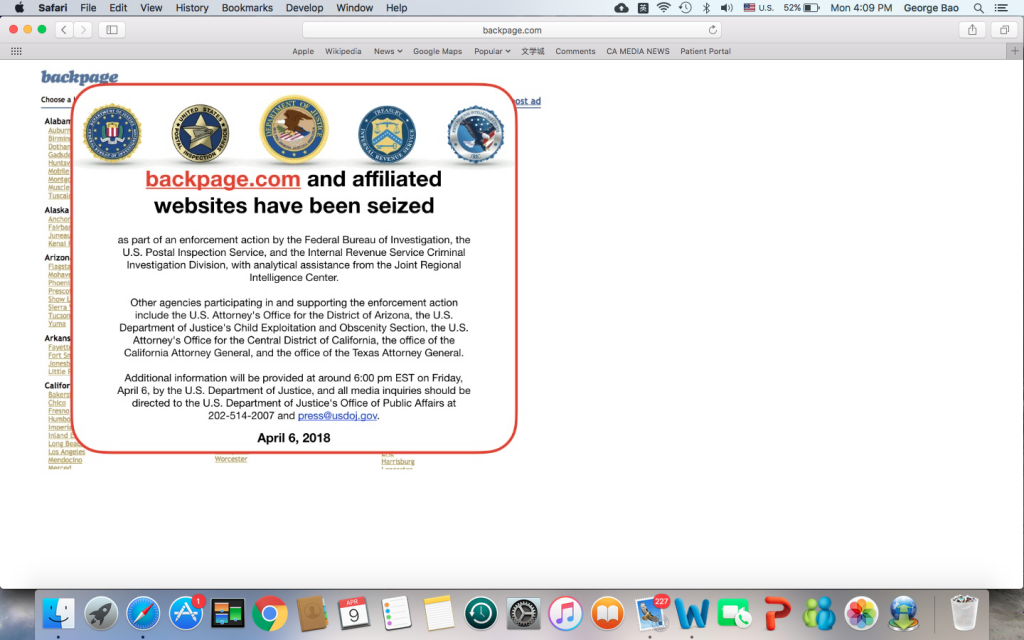 WASHINGTON – The U.S. Justice Department Monday announced the seizure of Backpage.com, the Internet’s leading forum for prostitution ads, including ads depicting the prostitution of children.

“But this illegality stops right now.  Last Friday, the Department of Justice seized Backpage, and it can no longer be used by criminals to promote and facilitate human trafficking. I want to thank everyone who made this important seizure possible: all of our dedicated and committed professionals in the Child Exploitation and Obscenity Section and our U.S. Attorney’s Office in the District of Arizona, the FBI, our partners with the IRS Criminal Investigation, our Postal Inspectors, and the Texas and California Attorney Generals’ offices. With their help, we have put an end to the violence, abuse, and heartache that has been perpetrated using this site, and we have taken a major step toward keeping women and children across America safe.”

“Backpage has earned hundreds of millions of dollars from facilitating prostitution and sex trafficking, placing profits over the well-being and safety of the many thousands of women and children who were victimized by its practices,” said First Assistant U.S. Attorney Elizabeth A. Strange.  “It is appropriate that Backpage is now facing criminal charges in Arizona, where the company was founded, and I applaud the tremendous efforts of the agents who contributed to last Friday’s enforcement action and who assisted in obtaining the indictment in this case.  Some of the internal emails and company documents described in the indictment are shocking in their callousness.”

“This website will no longer serve as a platform for human traffickers to thrive, and those who were complicit in its use to exploit human beings for monetary gain will be held accountable for their heinous actions,” said FBI Director Wray.  “Whether on the street or on the Internet, sex trafficking will not be tolerated. Together with our law enforcement partners, the FBI will continue to vigorously combat this activity and protect those who are victimized.”

“The events of last Friday and today are a big win, not only for the agents who investigated these crimes, but more importantly for the victims, including children, who were harmed as a consequence of the alleged actions of Backpage.com,” said Chief Postal Inspector Cottrell.

“By laundering the illegal gains of an enterprise, Backpage perpetuated the exploitation of victims and continued to finance their business. The U.S. Postal Inspection Service is committed to protecting our customers by stopping the money laundering to ensure the cycle of victimization ends”

“An indictment of this magnitude is particularly troubling when you look at the various layers of corruption and exploitation that are alleged to have occurred,” said IRS-CI Chief Fort.

“The masterminds behind Backpage are not only alleged to have committed egregious amounts of financial crimes such as money laundering, they did so at the expense of innocent women and children.  While these types of investigations can be made more challenging with the use of virtual currency, offshore banking, and the anonymity of the Internet, it should serve as an example to all criminals that there is not a place they can hide where we will not find them.”