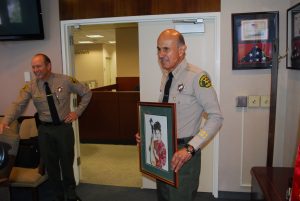 LOS ANGELES – Chances for former Los Angeles County Sheriff Lee Baca to get lesser jail terms seemed dimmer Monday after a federal judge rejected a plea agreement under which Baca would have serve up to six months in prison for lying to federal authorities.

Daniel Deng, an attorney at criminal law, said U.S. District Court Judge Percy Anderson obviously is not satisfied with the agreement and wants to put more severe punishment on him.

Baca, who hoped to end the case as soon as possible, thus faces a most difficult decision to make: let Anderson to give him the severe sentence, or ask the court to have a jury trial, said Deng.

Based on Deng’s experience, the rate for the jury to give a guilty verdict is over 90 percent. Worse still, if convicted by the jury, Baca faces a much severe punishment like his former No. 2 person in the department Paul Tanaka, who received a five-year term after the jury gave him a guilty verdict.

Baca, 74, had pleaded guilty earlier this year to lying during an FBI investigation into allegations that his department had tried to block a federal inquiry into abusive deputies in the county jails.

His plea was part of deal that would have seen him serve less time behind bars that than any of his subordinates. Baca’s attorney argued that the former sheriff should not serve any prison time because he is in the early stages of Alzheimer’s disease.

Baca, who married a Chinese woman, is called a “Chinese son-in-law” and the Chinese community in California started a campaign in March this year to collect signatures to ask the judge to give Baca leniency because of Baca’s long time contribution to the Sheriff Department and to the community.

Joaquin Lim, former Walnut City councilman Lim who was the first Asian-American elected to the Walnut City Council in 1995, organized a rally in Pasadena to voice support to Baca. About a dozen of elected officials or former officials in the Chinese community attended the rally to ask the judge to give leniency to Baca.

To read the story on Apple New app, please go to: