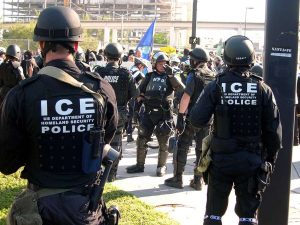 All of the 100 men and 12 women taken into custody by ICE Enforcement and Removal Operations (ERO) officers during this week’s operation, which concluded late Wednesday, had criminal histories, ICE said.

The majority (62) had prior felony convictions for serious or violent offenses, such as child sex crimes, weapons charges, and assault, according to ICE. The remaining arrestees had past convictions for significant or multiple misdemeanors.

One of those taken into custody is a previously deported criminal alien who will now be presented for federal prosecution for re-entry after removal, a felony punishable by up to 20 years in prison.

The remaining individuals are in ICE custody awaiting a hearing before an immigration judge, or pending travel arrangements for removal in the near future, ICE said.

“By taking these individuals off our streets and ultimately removing them from the country, we’re making our communities safer for everyone.”

ICE continues to work with local law enforcement partners to uphold public safety, while taking dangerous criminals out of the communities, according to ICE.

To read the story at Apple News app, please go to: