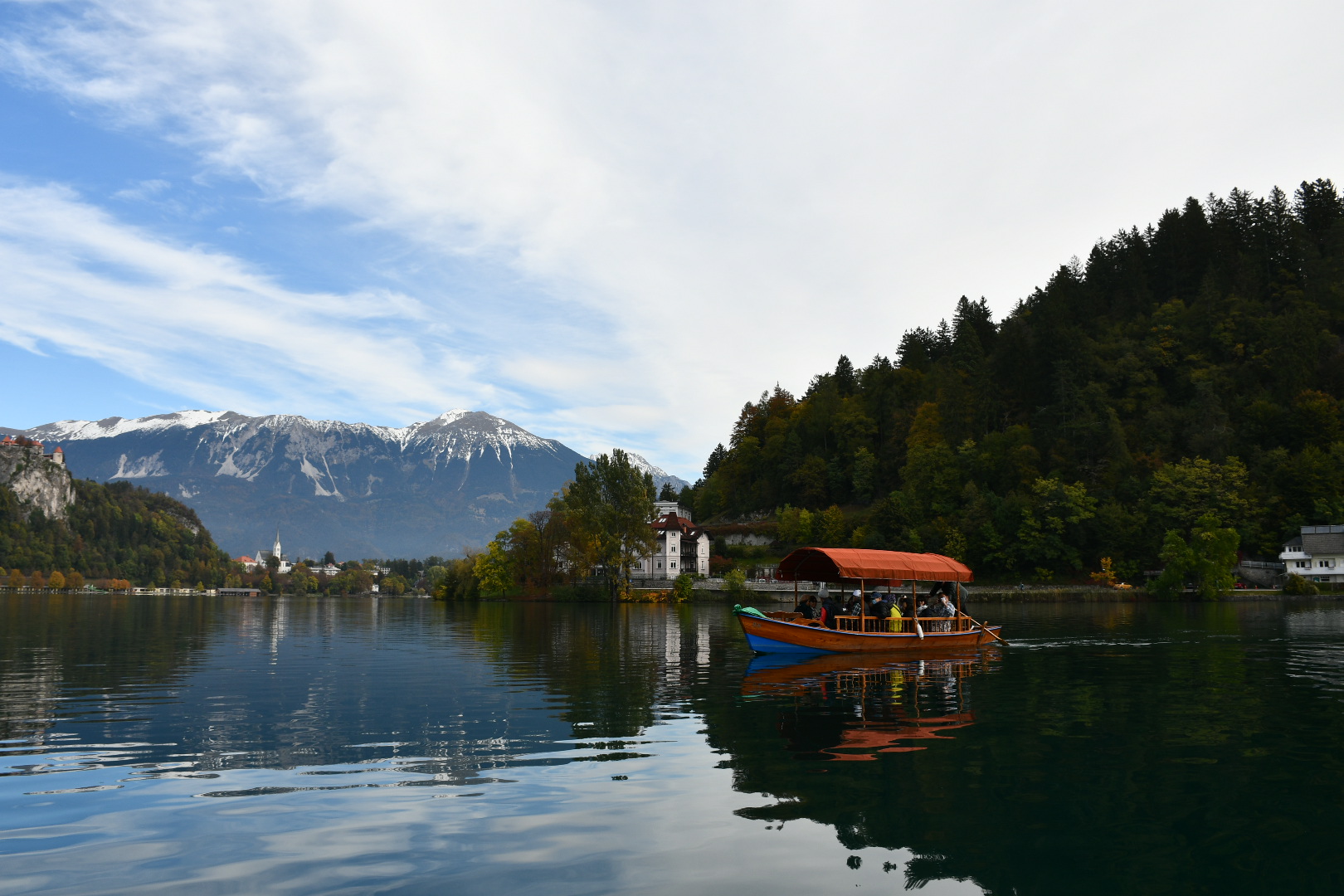 LOS ANGELES – Walking on the streets of the oldtown in Split, a small city in Croatia where the Diocletian Palace is situated, we were among the few tourists with Asian origins, but two years ago before Covid-19 pandemic broke out, Asian tourists were seen everywhere.

“People here will be happy to see you after the absence of about two years of large inflow of tourists from Asia and other parts of the world,” Jason Yang, a tourist guide from Signet Tours told us.

With tourism as the main support, Croatia and Slovenia suffered significantly, and local people see it as a good sign when a group of tourists came to visit.

According to Mr. Yang, we are the second group of tourists Signet Tours has ever arranged to tour Croatia and Slovenia since the pandemic. All my group members are from the United States, since mainland China, Taiwan and other Asian countries have not opened their doors for tourists to walk out of their countries.

Before I flied to Croatia, I had the concern that the pandemic has changed many people’s mind toward Asia, especially to China, can we be treated friendly as before?

At least two cases I have met with have put my heart at ease. In Split, I was wandering on the street, trying to find the sea salt chocolate store. A young man in his 20s passed by me on his bike for delivery, and I asked whether he could tell me which way to go to the sea salt chocolate store. He said it was on the left side of the street, then rode away. A few minutes later, the young man came back, stopped his bike in front of me and told me that the chocolate store was on the right side of the street, just keep walking and I could find the place in a short distance.

The second case is in Zadar where I was walking through the oldtown to the hotel after dinner and could not find the hotel. It was around 9 pm and not so many people were walking by in the location. I looked around and found a woman in her 30s. I approached her and asked whether she knew which way to go to my hotel. She asked for the hotel name and told me that it was very close to me. She then told me to follow her since she was going to the same direction. She led me to the hotel and we said goodbye to each other.

During the whole trip, we met many people in different places, all very nice and friendly. None of us had become a target of hate crimes or even been treated unfriendly.

My interest to Croatia and Slovenia started with a song from the Yugoslavia film The Bridge. In the early 1980s, The Bridge was among the first group of foreign films being imported to China and dubbed in Chinese. Many Chinese, now at 60s and 70s, can still sing the theme song Bella Ciao, in Chinese translated as GOODBYE MY FRIENDS. The film has made more Chinese to know there is a country in Europe called YUGOSLAVIA.

Yugoslavia is no longer existing, it was dissolved in 2006 when the six republics that made up the federation – Bosnia and Herzegovina, Croatia, Macedonia, Montenegro, Serbia (including the regions of Kosovo and Vojvodina) and Slovenia, declared independence from 1991 to 2006. Yugoslavia is no more, but Croatia and Slovenia are the two republics that have attracted the world with their beautiful sceneries and colorful culture.

The most beautiful sceneries I have ever seen on the trip are in the small town of Lake Bled in Slovenia. The Bikli Balance Hotel overlooks the lake with Bled Island in the middle, Bled Castle built in the 16th century on a precipice above the city of Bled, with the snow-covered Alps in the background.

While in the Bled Castle, we could enjoy the view of the whole city with the lake as a mirror. My wife Rosa and I printed a certificate to celebrate our 43rd wedding anniversary on a handmade paper with a reconstructed Gutenberg printing press, invented by Johannes Gutenberg in 1440s in Germany.

The history of Yugoslavia is closely linked with Josip Broz Tito. As president of former Yugoslavia, he was called an iron man, and he had a summer palace on the side of Lake Bled, now open to the public as a restaurant, and we had lunch there to taste his share of history.

To many Chinese, they know the name of Josip Broz Tito more than Yugoslavia. In 1960s, China started an anti-revisionism movement against the Soviet Union. China called the Soviet Union as NEW REVISIONISM and Josip Broz Tito as the old revisionist because Tito was the first leader in the Soviet-led socialist countries to break away from socialism and adopted a pro-west policy. Tito also became a founding member of the Non-Aligned Movement in 1961.

I asked Sonja Babic, our local guide, how people think of Tito, who had been called a dictator by the media in the west. The woman in her 30s said so far as she knew, most of the local people think positively of Tito for his contribution to get the six republics together, and people enjoyed more peaceful life than now. She said now many young people had to leave their own native countries to see for better new life.

I like to find connections between sceneries or tourist attractions to historical figures, and besides Tito, I am surprised to learn that Tesla was born and raised in a small town in the Plitvice Lake National Park, one of the world’s great natural wonders, a lush and pristine valley with 16 dazzling terraced lakes, 90 waterfalls and several kilometers of boardwalk.

Now almost everyone knows that Tesla is a world-known electric car brand, but the real Tesla, Nilola Tesla, was born in 1856 in the Austrian Empire, now Croatia and moved to the United States in 1884 to work for Thomas Edison. Tesla invented, predicted or contributed to development of hundreds of technologies that play big parts in our daily lives — like the remote control, neon and fluorescent lights, wireless transmission, computers, smartphones, laser beams, x-rays, robotics and, of course, alternating current, the basis of our present-day electrical system.

Since the national park has 16 dazzling terraced lakes, it is usually called by the Chinese as the 16-Lake Park. The best part is the efforts to preserve the area as it is naturally, and walking is the only way to see the lakes and waterfalls.

Our first stop of the trip is Dubrovnik, a beautiful city in the south of Croatia. The hotel we stayed, Hilton Imperial Dubrovnik, is among the best hotels in the city, which overlooks the Adriatic Sea and the old town.

Dubrovnik Oldtown is known as one of the world’s finest and most perfectly preserved medieval cities in the world. The stone walls built between the 11th and 17th centuries extending to the Adriatic Sea formed a splendid picture for tourists.

The Oldtown, now a UNESCO world heritage site, was reconstructed after the earthquake on 1667 and another reconstruction after it was attacked during the civil war of the early 1990s.

The local guide told us that it is also one of the few old towns that there are residents who own their houses and live there, therefore it is a real living old town, not as some other old towns that only for show.

At a street corner, I found two photos posted by the owner of the house, which tells what his house looked like before the civil war in 1991 and after. Some of the houses were damaged during the war and the city helped the owners to reconstruct.

The Island of Hvar, considered to be one of the 10 most beautiful islands in the world, has a history of 140 years of organized tourism, and the hotel we stayed is a resort overlooking the bay and beaches, with some smaller islands on sight.

We climbed to the Hvar Fortress to look down the whole city, and had dinner at one of the restaurants on the beach to watch the sunset before tasting the food.

The city of Split gives us a chance to taste the smell of the ancient ruler, Diocletian, who built a palace in the year of 295 to 305 and lived there to enjoy his retired life. It is now one of the best preserved monuments of the Roman architecture in the world, and about 3,000 local people still live within its confines.

Wandering through the narrow lanes on the pebble road, tourists were looking for the traces of history.

Postojna Cave in Slovenia is another must see attraction. Slovenia is rich in caves, and so far at lease 8,000 caves have been explored. However, Postojna Cave is the most visited with over 40 million people in the last 200 years. It is the first cave to be open to the public in 1830, and in 1840 electric lights were installed in the cave. In 1872 a small railway was built to take tourists deep into the cave. Now the train runs over 10 minutes to send tourists to the best spots.

Oldtown to walk directly to St. Mark’s Church, a monumental, medieval-style, Catholic church constructed in the 13th century, with the parliament on the right and government on the left.

The 13th-century St. Mark’s Church is one of Zagreb’s most emblematic buildings. Its colorful tiled roof, constructed in 1880, has the medieval coat of arms of Croatia, Dalmatia and Slavonia on the left side, and the emblem of Zagreb on the right.