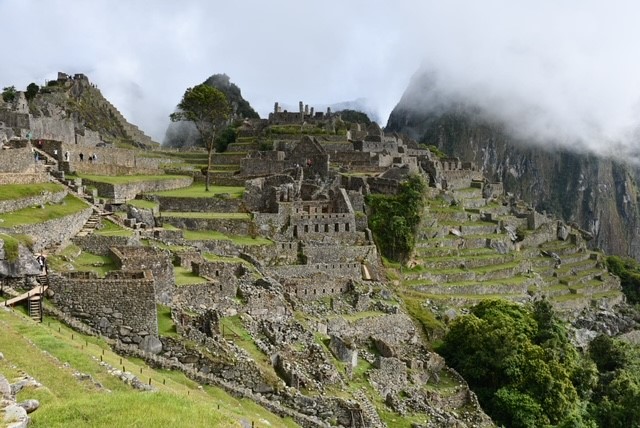 What attracts me to visit Peru during the Covid 19 pandemic is certainly Machu Picchu, the New Seven Wonders of the World in a worldwide internet poll in 2007. However, the road to Machu Picchu, the most beautiful lost city located on a 7970 ft above sea level mountain ridge built by Inca around 1450, is not even. 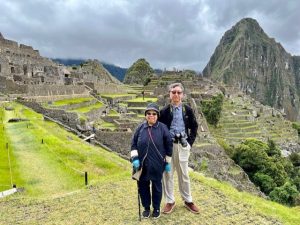 We flied from Los Angeles to Lima, Peru’s capital, to meet other members of the tourist group sponsored by Signet Tours and stayed overnight in Lima before we flied to Cusco and took the luxury train Belmond Hiram Bingham, to Aguas Caliente, a small town where most of the tourists will stay to tour Machu Picchu. From the small town we took a shuttle bus to the hills and luckily enough, Signet Tours reserved rooms for us to stay at Belmond Sanctuary Lodge, the only hotel that is right at the entrance of Machu Picchu but has only 31 rooms. 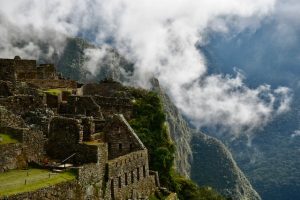 After check-in, we started our exploration to the lost stone city, which was first discovered in 1911 by Hiram Bingham, an American who made the then bush-covered lost city world famous. Since our hotel is right at the entrance, my wife Rosa and I could walk rather easily to the UNESCO World Heritage without much effort. At our age, it is hard to climb steep steps, and Signet assigned a local guide to lead us to the site.

Walking on the stone steps leading to the 500 stone buildings built over 500 years ago, I felt so amazed. I did not climb to the top to have a bird-eye view of the whole lost city, but those I have visited made me believe that more mysteries have remained unsolved. 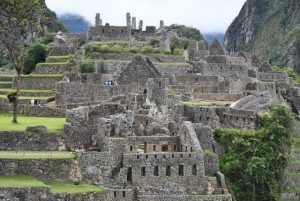 I wonder where those early residents, called Incas, got the stones and how they moved them to the top of the mountain, cut them into different shapes, some of them even have the same size as bricks, and build those buildings without using any mortar! 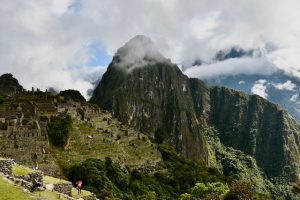 Those buildings ranging from baths and houses to temples and sanctuaries. Many modern-day archaeologists now believe that Machu Picchu served as a royal estate for Inca emperors and nobles. 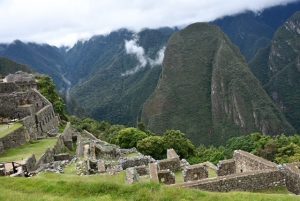 The stone city is located on the mountain top surrounded by piecing gorges and mountains. Even now the bus will take about 30 minutes to get there from Aguas Caliente, how Incas managed to climbed to the top with supplies and building materials? No one knows how many people were involved in the project. Also, no one can provide evidence to explain why all of a sudden the stone city was abandoned and the residents disappeared.

Machu Picchu is the highlight of the visit, and all tourists coming from abroad would first arrive in Lima, the capital. 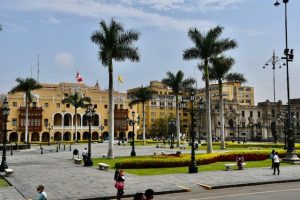 The Plaza de Armas of Lima or Plaza Mayor, is certainly a must-see site. It is the political, cultural and social center of the capital city, therefore around the plaza we saw buildings of great significance such as the Viceroyalty Palace or Presidential Palace, the Cathedral, the Archbishop’s Palace, Palace of the “Club de la Union” and the City Hall.

However, we arrived at a wrong time where a demonstration was going on and police blocked entrance to the square and some buildings. We could only take photos behind the yellow line. 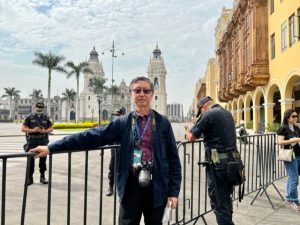 The Miraflores Park Hotel where we stayed is facing South Pacific Ocean, where modern buildings and American style shopping mall along with the beautiful scenes constitute a modern, developed “world”. Along the coast is the richest area of Lima, which is a sharping contrast to the old town where we passed by, with poor people begging for money and food. 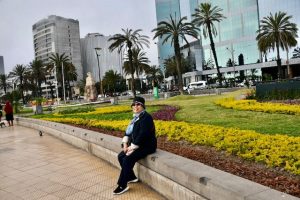 To tour Machu Picchu, we have to fly from Lima to Cusco first. As capital of the Cuso Region, it is the seventh most populous city in Peru. But most importantly is the city’s historical value. With its elevation around 11,200 ft, the city was the capital of the Inca Empire from the 13th century until the 16th century Spanish conquest. 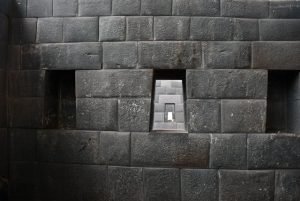 The city was declared a World Heritage Site by UNESCO in 1983 and thus has become a major tourist destination.

As a World Heritage Site, the streets and many buildings have been preserved as the original style. Therefore, we can see narrow, pebble paved streets, palaces, churches and other Inca heritages.

Qorikancha was Inca’s palace, but it was turned into a church by Hispanics. What impressed me was the stone structure that was made so sophisticated hundreds of years ago. The palace is a live exhibit to show us how Incas were so skillful and talented at cutting stones and put them together in big buildings. All stones were joined not with mortar, and even today it takes great efforts to do so.

Sacsayhuamán Fortress is one of the most amazing buildings in the world. It took 25,000 laborers to build in about 90 years! Construction is believed to be during the government of Inca Pachacutec in the 15th century. Stones were extracted from the nearby quarries and moved it 20 kilometers to the hill of the city of Cusco. The largest block of stone is over 9 meters high and weighing 100 tones. 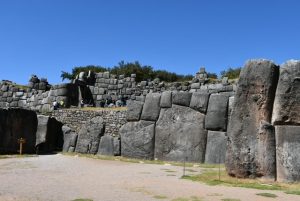 Walking by the stone walls, I wondered whether it was built by humans or by aliens, because recently a kind of writing more than 30,000 years old was discovered on one of the stones. 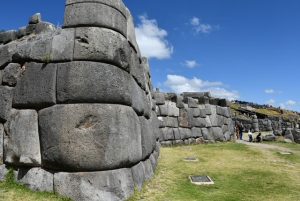 Peru is a country full of mysteries. The Machu Picchu, the Sacsayhuamán Fortress, the Qorikancha, and more.

About 31 miles northwest of Cusco, on a high plateau at about 11,500 ft, Moray is mostly consisting of several terraced circular depressions, the largest of which is approximately 98 ft deep. 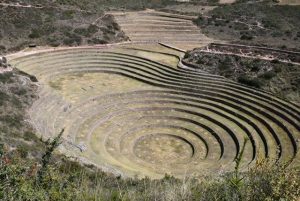 Most of the terraced fields are circular built by Incas with stone walls and the whole fields are surrounded by mountains. The fields are actually in a basin without any outlet. I just wonder how the water coming from the surrounding mountains would flow away. 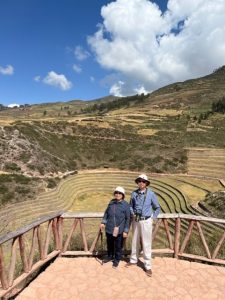 The purpose of these depressions is uncertain, but their depth, design, and orientation with respect to wind and sun creates a temperature difference of as much as 5 °C (9 °F) between the top and the bottom.

This landmark is widely agreed to have been used for farming, and soil samples have shown that soils were brought in from different regions to be used in helping grow crops at the different levels of the terraces. It is believed to have been used by the Incas to study the effects of different climatic conditions on crops.

Another attraction is the Salt Mines of Maras, located 31 miles in the northeast of Cusco at an altitude of 10,498 ft. About 4,500 salt wells placed in the form of stepped terraces in the middle of slope of the hill Qaqawinay. About 200 local residents owned those salt wells and salt is their main income. 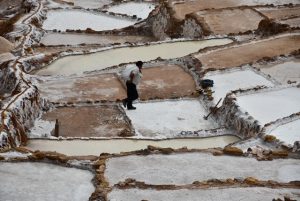 Our last stop in Peru is Lake Titicaca, the highest navigable lake in the world.  By volume of water and by surface area, it is the largest lake in South America. It is an extraordinary spectacle wherever one looks. The lake is surrounded by reed beds and dotted with many islands, each of which has its own unique history. 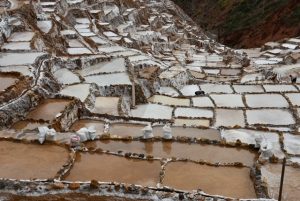 Taquile, Amantani and the floating Uros islands offer the opportunity to experience directly the traditions and customs of communities that have learned to make the most of their surroundings and live in harmony with nature. 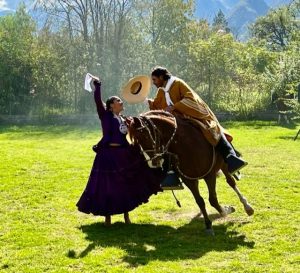 According to Wikipedia, other cultures lived on Lake Titicaca prior to the arrival of the Incas. In 2000, a team of international archaeologists and divers found the ruins of an underwater temple, thought to be between 1,000 and 1,500 years old, most likely built by the Tiwanaku people. The ruins have been measured to be 200 by 50 m (660 by 160 ft). The temple was accompanied by a village, some roads, terraces for farming and a retaining wall that ran for 2,624 feet.

Throughout the trip, we used all kinds of transportation means from the sky to the land and to the lake. But the Belmond Hiram Bingham luxury train and the Andean Explorer luxury train are very special. The Belmond Hiram Bingham train leading to Machu Picchu provides very good service and delicious food, while the Andean Explorer provides luxury and comfortable sleeping cars for us to enjoy the beautiful scenes along the route. 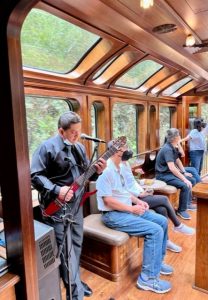