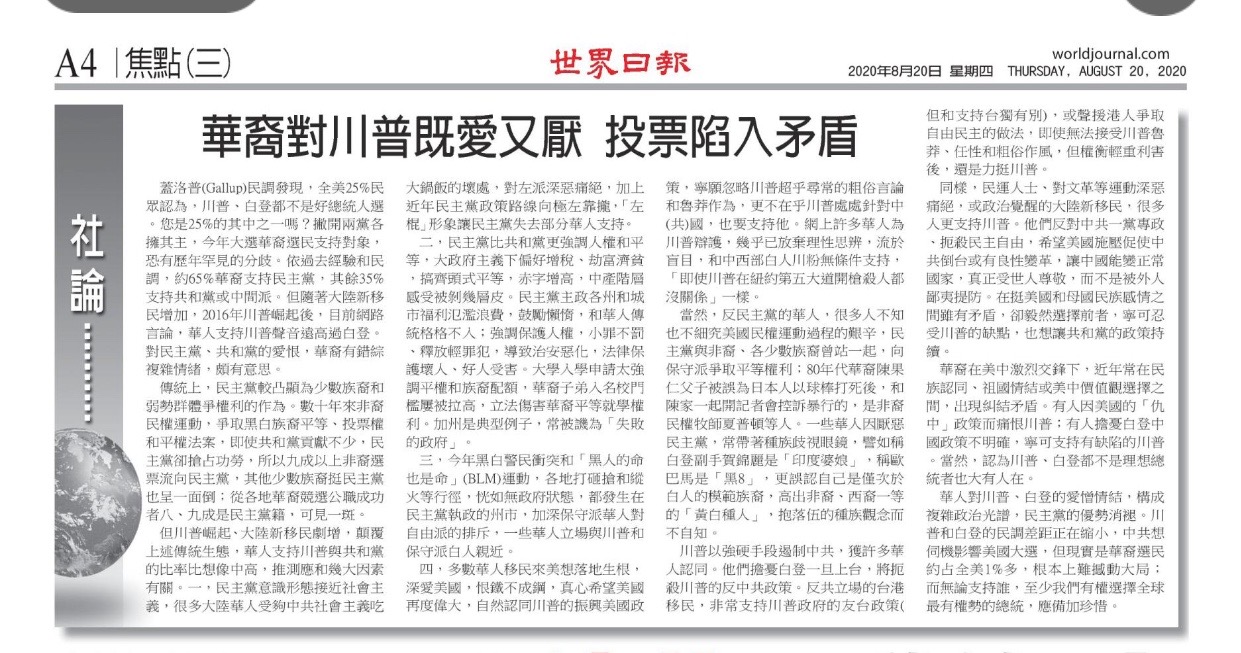 LOS ANGELES – Love and hate mixed together towards President Donald Trump from Chinese Americans before the election day draws near, World Journal, the leading Chinese language newspaper in the United States, said in an editorial on Thursday.

Chinese Americans are sharply divided over whom they are going to vote for this year than any previous presidential elections, the editorial said.

Based on the previous experience and polls, about 65% Chinese Americans supported Democrats, while only 35% of them supported Republicans. But as the increase of new immigrants from China in the past years and after the victory of Trump in 2016, the voice supporting Trump online is stronger than Joe Biden.

The editorial said that it is interesting that Chinese Americans are complicated in their feelings towards Democrats and Republicans with both love and hate.

The editorial analyzed possible reasons behind the increasing support towards Republicans among Chinese Americans.

According to the paper, the first reason may be the trend towards extreme left by Democratic Party in its policies in the past years.

Democrats are more likely to increase tax. Cities led by Democrats show the abuse of benefits to encourage laziness. Those cities will not penalize offences to steal property under certain amount and release criminals to lead to the deterioration of community safety. On education, Democrats have stressed too much on affirmative actions to make Chinese American children more difficult to be admitted into better schools. Those are factors for the second reason.

On the third reason, the Black Lives Matter movement started early this year has caused violent actions in the country with looting and killings in many cities, most of them led by Democrats. That has pushed Chinese Americans towards the conservative white people, the paper said.

Many Chinese Americans coming to the U.S. for the American Dream and sincerely wish that America will be great again, that is in conformity with Trump’s policy. That is the fourth reason, according to the paper.

As to those immigrants from Taiwan and Hong Kong, they love Trump’s policy to be more friendly with the Taiwanese government and afraid that if Biden wins the election, the anti-communist policy towards China by the Trump Administration will be changed.