COSTA MESA, CALIFORNIA – An 18-day celebration of the Chinese New Year, the Year of the Rooster, kicked off Thursday at South Coast Plaza with lion dances, opera and ballet dances that attracted hundreds of invited guests and shoppers.

The whole South Coast Plaza seemed to have been turned Chinese Thursday as the lion dances performed at the Jewel Court of the plaza accompanied by drums and other Chinese music.

Chinese food was served at the court to invited guests that had made the court very crowded, filled with festival atmosphere.

A giant rooster has been erected in the middle of the court to attract visitors. It has become a celebrity that almost every visitor will post for a picture.

The Chinese New Year celebration event was sponsored by South Coast Plaza in cooperation with the Consulate General of China in Los Angeles. The partners of the event include Richard Nixon Foundation, Bowers Museum, Xinhua News Agency, UCI, the Philharmonic Society and American Chinese CEO Society.

The renowned Hangzhou Opera and Ballet Theatre will perform at the plaza during the Chinese New Year celebration which will last till February 12.

The event, which is free to the public, is featured with exhibits, entertainment, special events and promotions and shopping incentives. 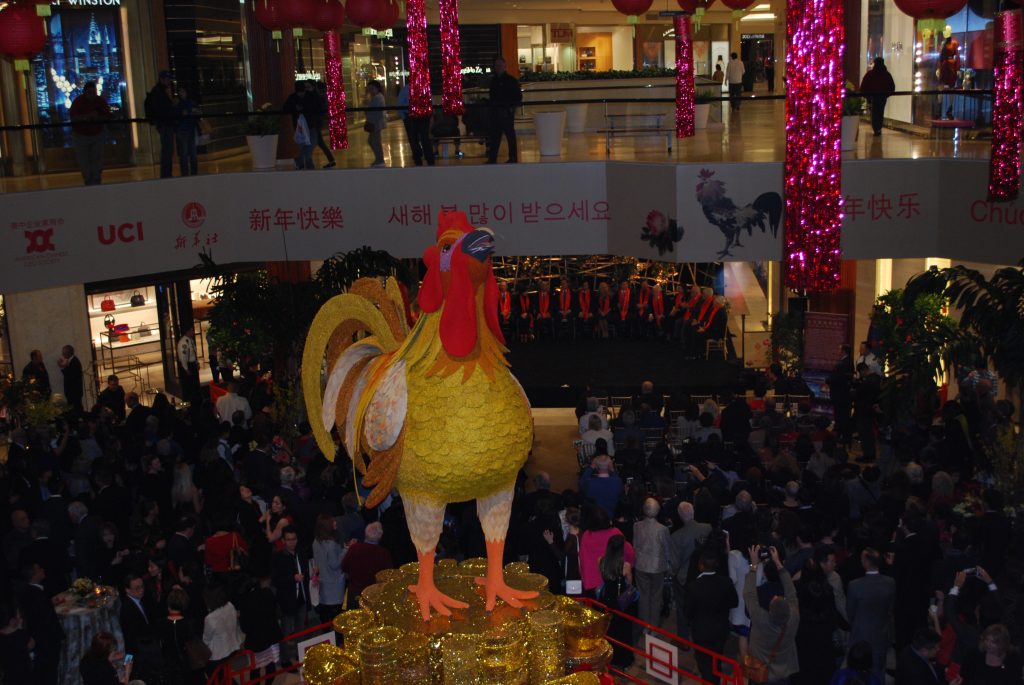 Visitors will have the chance to view the towering floral exhibit by Fiesta Parade Floats featuring a magnificent rotating 18-foot rooster adorned with gold coins, scrolls, lanterns and firecrackers.

Boutiques will host special events and offer Year of the Rooster merchandise and special promotions in honor of the holiday.