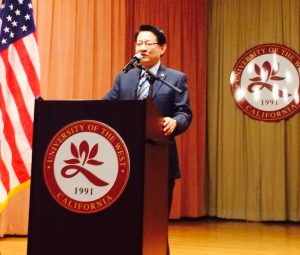 Eng, who is Vice President of the Board of Trustees of the Los Angeles Community College District, wrote in his memo as the nation watched both national party conventions, the most common question he heard from his constituents was the universal importance of education and the question “how do the candidates feel about education especially the costs.”

On Saturday, he had the opportunity to speak at a college forum at a college in the San Gabriel Valley on access to education called “Achieving the American Dream.”

He said at the forum that slightly less than half of the American public polled supports free college tuition. However, tuition is normally only a fraction of the other costs such as books & supplies, technology, room and board, and transportation – so a comprehensive approach to deal with both tuition and non-tuition costs is needed.

On the California ScholarShare Savings Plan, Eng said it should be considered. A “529” State savings account allows parents and students to pre-pay the costs of a college education and receive a possible federal and/or state tax credit at the same time. Accounts can be set up for both public and private institutions.

“We must reduce debt from student loans.  Currently college student loans stand at $1.35 trillion which is an increase of 130 percent since the Great Depression,” he said.

“My realtor and auto dealer friends tell me that student loans can impact credit scores that hurt the ability to get a loan for a home or a car,” said Eng.

He said it is better to consider HR5622 which would extend the time that students must repay their loans from six months to eighteen months after graduation to allow them a chance to save money from their first job.

HR5622 is a bill being discussed at the U.S. Congress, which will amend the Higher Education Act of 1965 to give borrowers an option to extend the grace period prior to the beginning of the repayment period, and for other purposes.

To read from Apple News, please go to: