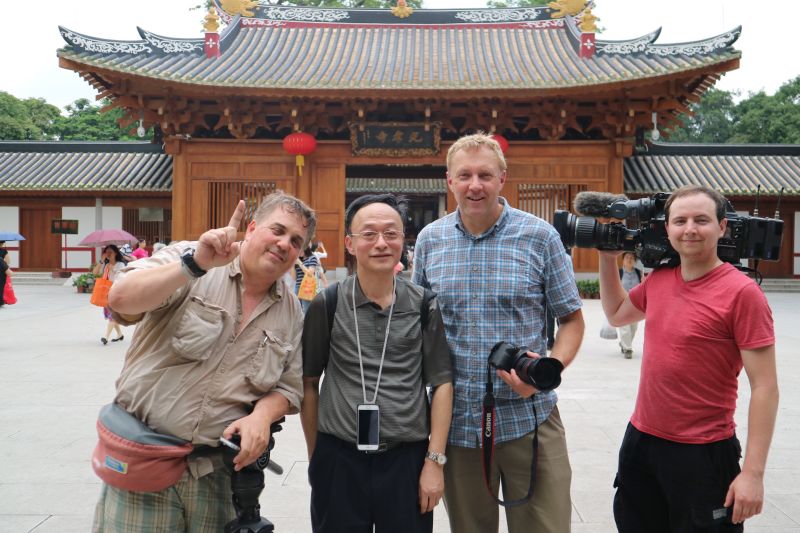 “You did a great job!” and “Your show inspired me to go to China myself!” are some of the comments made by American viewers after viewing the Maritime Silk Road series on PBS, Public Broadcasting Service, in the United States.

Carla Perkins from Las Vegas sent her comment to Jeffrey Lehmann, producer of the “Weekend Explorer” travel series on PBS. Lehmann travelled to China to co-produce the “Maritime Silk Road – Birth of the Global Economy” historical documentary series with Guangdong Province in China, where the Maritime Silk Road (MSR) started.

“Your Maritime Silk Road series is so educational. I wish my kids could have watched this when they were younger. They could have learned so much about world history. I was interested to learn about the diverse cultures in China. It’s interesting and really keeps your attention. I just loved watching it. I especially loved your show on the silk! It was fascinating! Please make more shows,” added viewer Perkins.

“You did a great job! My husband loved it and recorded it!” wrote an unnamed viewer in Texas.

“Wow! Your show inspired me to go to China myself,” wrote Lynn from Los Angeles.

“Awesome show! When will Weekend Explorer release a travel guide for this experience?” wrote John Orlando from Florida.

“The Maritime Silk Road series is awesome! Are you making more episodes? Will they be in 4K so I can watch them in 4K on my new TV?” wrote Mark Stanton from Boston.

Jeffrey talked about the airing of Maritime Silk Road (MSR) in the United States: “My viewers are loving the new MSR series and the ratings have been very strong in the U.S. I don’t get viewership information for Canada, but I think it will be very similar.”

The MSR series is being aired on the same PBS stations that air “Weekend Explorer” reaching 74% of U.S. households with TVs, and all of the most populated cities in Canada. It only reaches about 20% of Canada’s area but 85% of Canada’s TV households.

The Maritime Silk Road is enjoying excellent ratings and is very popular with PBS viewers.

According to Jeffrey, the Discovery Channel is one of the most popular channels in the United States, but the average rating for this series is much higher.

In addition, the MSR series is airing on Direct TV in more than 21 million U.S. households reaching 58 million viewers.

“I do not get any ratings information from Direct TV, but again the viewers are probably the same or similar to PBS,” said Jeffrey.

“It’s important to mention that PBS viewers are richer, more educated, and more influential than viewers of other TV stations. In addition, since Direct TV is an expensive paid service it too attracts the rich, successful, and influential,” said Jeffrey.

Jeffrey stressed that the MSR will still receive a lot more exposure, most PBS stations will re-air it for years to come.

“If I make more episodes so there are at least 13 episodes, although better would be 22 episodes, and best of all 44 or more episodes, the series could be syndicated and gain significantly more views on other channels,” said Jeffrey.

According to Jeffrey, there are negotiations with a huge distributor in New York City for “Weekend Explorer” that has more than 1.5 billion viewers in S. America, Africa, India, and Indonesia. They were just recently introduced to the MSR series.

Jeffrey is Host and Writer of the Maritime Silk Road series, with William (Xiaoping) Wu as Executive Producer (USA).

Jeffrey said few people in North America have heard of the Maritime Silk Road, sea trade route from China to Europe. But, it has driven world history for more than 2200 years from the Fall of Rome, Europe’s Plague, Europe’s Renaissance, Christopher Columbus discovering the America’s, the rise and fall of Imperial China, and even the American Revolution plus much more are all directly caused by it.

William Wu is so pleased to see that the MSR series has attracted so many viewers in the U.S. He said the success of the series in the U.S. showed that it is better to invite American professionals to tell the story of China in the language and style that is acceptable to Americans and other Western readers and viewers.

He said the MSR series tries to portray the past glory of Chinese civilization and China’s central role in the creation of the modern global economy, a history that has been pushed aside over the last 100 plus years by Western centric thinkers. The series also describes China’s advanced maritime technologies and trade reaching way back thousands of years. In his opinion, Western countries were inspired by Chinese governance by an educated merit-based bureaucracy, advanced manufactured products, culture and traditions.