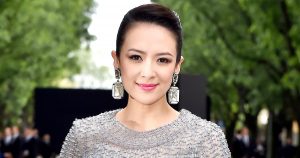 LOS ANGELES – Yi Nengjing, a well-known actress and singer from Taiwan, was angry because her photo with her doctor after giving birth to her baby in Los Angeles was posted on social media.

Yi Nengjing, whose English name is Annie Yi, gave birth to her second baby early this month at age 47 in a hospital in Arcadia, a Chinese populated city in Los Angeles County. But later she found her photo holding her baby with her doctor was circulating fast in the social media, that made her mad. Right now it is not clear who disclosed the photo.

Yi is not the first Chinese celebrity to give birth in the United States. Also, it is her second time – she gave birth to her first baby in 2002, also in Los Angeles.

Several months ago, Zhang Ziyi, who has successfully played a major role in the Hollywood movie The Crouching Tiger, Hidden Dragon, gave birth to her daughter in December last year at Hoag Hospital Newport Beach. The hospital in Orange County has since become another attraction for Chinese women who wish to give birth to their babies in the U.S.

Chinese movie stars Wang Baoqiang, Wang Xuebin, Huang Yi and director Chen Kaige all sent their wives to Los Angeles to give birth to their babies. Even China’s state TV, CCTV’s most popular anchorwoman Dong Qing has come to the U.S. to give birth to her baby.

According to the Shanghai newspaper National Business Daily, at least 500 companies offered “birth tourism” services in China in 2014. While there are no official statistics, the number of Chinese citizens heading to the U.S. to give birth likely is in the tens of thousands each year. The cost of a trip, including medical expenses, runs from $20,000 to $80,000.

The business is legal in China, but the tactics for entering the USA are not.

Last year, California authorities raided dozens of maternity hotels for Chinese women in Orange, Los Angeles and San Bernardino counties for alleged immigration and tax fraud. But that has not stopped Chinese pregnant women from coming to the U.S. to give birth to their babies.

The main attraction is that the babies who were born in the U.S. become U.S. citizens and they can receive better education from preschool s to colleges. Also, when children born in the U.S. turn 21, they can sponsor their parents to become legal U.S. residents so the whole family can emigrate to the U.S. This has been considered by many rich Chinese as a shortcut to get themselves immigrated to the U.S.

Those from Taiwan have another benefit: if their boys were born in the U.S., they do not have to return to Taiwan to serve in the military, a legal requirement for all boys born in Taiwan.

(Please go to Apple News to read the story: https://apple.news/TzL9hL9SrRLKEi1c5ExMyXA)