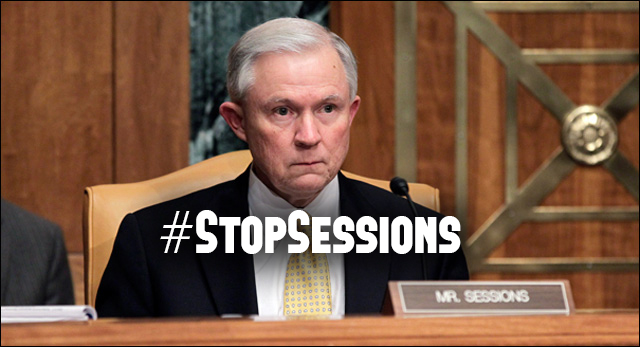 On November 18th, President-elect Donald Trump selected Senator Jeff Sessions (R-AL) as his nominee to become the Attorney General of the United States. A key responsibility of the Attorney General is to oversee the U.S. Department of Justice’s Civil Rights Division—enforcing our nation’s civil rights laws and upholding the U.S. Constitution.

The Attorney General also plays a significant role in immigration enforcement and adjudication, including setting policy, through the oversight of the immigration court system and the appointment of immigration judges.

AAAJ said in a statement that Senator Sessions has opposed civil rights legislation and led anti-immigrant efforts throughout his Senate career.

“His record of disenfranchising and denying the rights of people of color, immigrants, and Muslim communities, as well as his overtly racist statements made during his career as U.S. Attorney for the Southern District of Alabama, make him unfit for the position of Attorney General of the United States,” the statement said.

According to AAAJ, Senator Sessions has emerged as the lead anti-immigration voice in the United States Senate over the course of his 20-year tenure.

“Sessions has consistently expressed his opposition to, and raised alarmist concern regarding, patterns of immigration post-1965 – a watershed year in which the United States dismantled its explicitly racist national origin quotas (including the remaining vestiges of the Chinese Exclusion Act of 1882) and finally allowed larger numbers of non-Europeans into the U.S., creating the diversity we see in America today,” according to AAAJ.

Sessions has been the standard bearer for a nativist vision of America, sounding the alarm regarding the “unprecedented” percentage of the American population that is foreign-born – without regard for the fact that the current percentage is lower than during the late 1800s, when the foreign- born were overwhelmingly from Western Europe, AAAJ said in the statement.