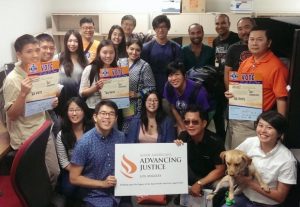 LOS ANGELES – Asian Americans Advancing Justice-Los Angeles (Advancing Justice-LA) announced Wednesday that it has helped a Chinese immigrant worker to recover unpaid wages and ask other immigrants who had similar situations to seek free legal help.
On June 9, 2016, Mr. Facun Min, a 53-year old Chinese immigrant, recovered $9,187 of unpaid wages and penalties from his former employer, A Plus Adult Day Healthcare Center in El Monte. In addition to $1,473 in unpaid wages, the employer was also penalized $7,714 for meal and rest break violations and failure to pay the minimum wage.
“Unfortunately, cases like Mr. Min’s are very common,” said Kat Choi, staff attorney at Advancing Justice-LA.
“What is important to know is that there are organizations like Advancing Justice that provide free and high quality legal services to help people like Mr. Min.”
From May 2014 to September 2015, Mr. Min was paid an hourly wage of $8.57 to transport elderly clients between their homes and the Healthcare Center using the company van. When the state’s minimum wage increased to $9 an hour on July 1, 2014, Mr. Min continued to receive his original hourly rate, depriving him of $1,473 of hard-earned wages.
Beyond being paid below minimum wage, Mr. Min was not allowed to take regular meal and rest breaks. In California, the law requires hourly workers to take a 30-minute meal break after working 5 consecutive hours, and a separate 10-minute rest break every 4 hours.
As penalties for violating meal and rest break requirements and failing to pay minimum wage, Mr. Min’s former employer was ordered to pay $7,714 in penalties in addition to the $1,473 in unpaid owed wages.
“I am happy to recover my wages that I rightfully earned and were unjustly taken from me,” said Mr. Min. “My salary at the Healthcare Center wasn’t enough to support my family so I had to take a second job at the local casino.”
Mr. Min filed his case to the California Labor Commissioner’s office, a state agency which investigates violations of state labor and employment laws. Advancing Justice-LA assisted Mr. Min in filing his case and representing him.
Attorneys at Advancing Justice-LA will be leading free workshops on employment law from 10:00 am to 12:00 pm on Friday, July, 22, 2016, and from 1:00 pm to 3:00 pm, on Sunday, July 24, 2016. Both workshops will take place at the Asian Youth Center, located at 100 West Clary Avenue in San Gabriel.

(To read the story on Apple News, go to: https://apple.news/TzL9hL9SrRLKEi1c5ExMyXA)